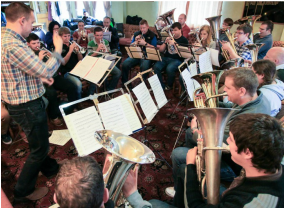 It is with great pleasure that Cathays Brass can announce our Launch Day was successful in bringing 30 musicians together to come and share their enthusiasm for music making in our home at St Joseph’s Sports and Social Club.

Guest conductor (and Trustee) Owen Farr expertly led the fantastic rehearsal, by guiding us through some experimental repertoire and testing the ensemble to get instant improvements from our sight reading attendees.

A major part of the Cathays Brass ethos is about allowing opportunities for up and coming musicians to develop their all round musicianship and this was evident during the event: in addition to Owen’s leadership, we saw some fine conducting from the band’s Musical Director Martin Humphries, and also from guests Christopher Bond and Matthew Leach, who all showed why this commitment is important to the progression and bright future of community banding. 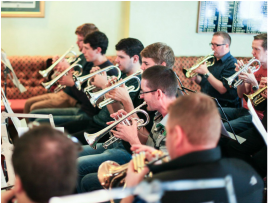 Attendees were also able to experience a rehearsal under the guidance of Captain Paul Collis-Smith, who is Director of Music for the Prince of Wales Divisional Band (one of the three professional Brass Bands newly formed as part of the Corps of Army Musicians.). Paul and members of his band provided much enthusiasm and support and for the day, not only by giving up their spare time to attend the event, but also by generously sharing their resources (stands and percussion). It is clear that, despite their short history, they are already becoming a great addition to the banding community in the South Wales area.


As a new ensemble with no existing library, we were very grateful to both the Prince of Wales Divisional Band and the Cory Band, who gave us access to their respective libraries for the day. 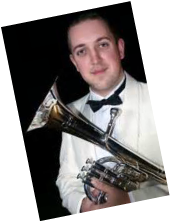 In addition to this, the interest generated by our recent formation, saw donations of music received from Matthew Hall, Christopher Bond and an arrangement by Jeremy Meadows Taylor, all of which allowed Owen to facilitate a varied and fast paced rehearsal.

The rehearsal finished with the exciting announcement that Cathays Brass will once again be teaming up with Owen for a project involving members of the esteemed Cory Band in 2015. Stay tuned for more information on this and other events in the pipeline from an active band looking to establish its place in the Cathays community. A massive thank you must finally be given to Owen Farr for his fantastic passion and support of Cathays Brass. The wheels to keep community music alive are now well and truly in motion!

Some fantastic photos were captured by photographer Matthew Flew and can be found here. A special mention must also go to Awen Hughes for volunteering her fantastic sandwich making skills on the day.